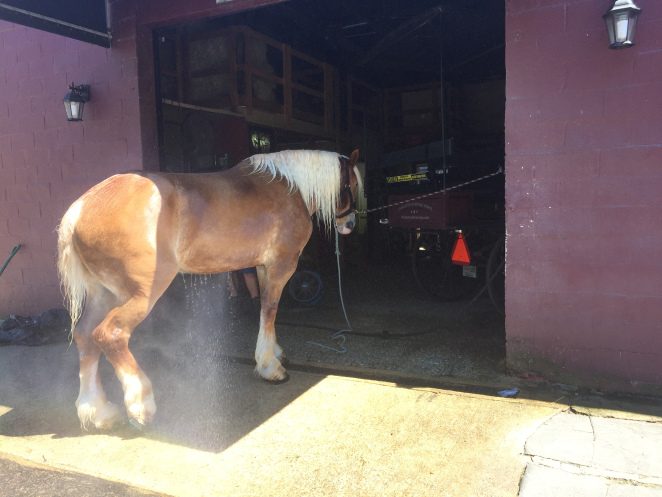 A couple of days ago, two white people were arrested for vandalizing a 1932-erected Confederate statue. The papers don’t identify the vandals as white, of course, but a later post includes their photographs. They threw red paint on the statue, located in White Point Park, intended to depict, I reckon, blood. We’ve learned that many of these 1920s-1930s statues were commissioned by the United Daughters of the Confederacy, a group that has a museum here, located in the old Slave’s Market (now called City Market). In a statement made concerning the push to have these statues removed, the UDC remark:

The United Daughters of the Confederacy totally denounces any individual or group that promotes racial divisiveness or white supremacy. And we call on these people to cease using Confederate symbols for their abhorrent and reprehensible purposes.

We are saddened that some people find anything connected with the Confederacy to be offensive. Our Confederate ancestors were and are Americans. We as an Organization do not sit in judgment of them nor do we impose the standards of the 21st century on these Americans of the 19th century.

Statements such as these, contradictory at best, illustrate the ways in which racial divisions in the U.S. continue to be swept under the carpet, pushed into the closet, and masked. One cannot both denounce white supremacy and insist on memorializing the very hallmarks of U.S. white supremacy.

Here in Charleston, during a carriage tour, our guide, Rivers, very clearly took to heart the name of the company he works for: “Old South”. Rivers, who seems to want a career as a stand-up comic or comedic actor, affected an attitude of the Southern good ole boy, a charming, funny, self-deprecating sort, who loves his drink, his god, and most of all, his Charleston (despite not being from around these here parts). Rivers spoke in a “we” as he offered up a brief history of the best white men Charleston has to offer. At some point, I thought I had drifted away and not heard who this “we” referenced, so I interrupted his speech and asked “Who is this we you keep referring to?”. He replied, “The Brits. Did I not say that?”. Did I mention I was the only person of color on the tour? Needless to say, the White passengers shuffled in their seats when I raised my question; the White couple sitting next to me, already irritated that they had to share their 4-person bench with someone other than themselves, were visibly irritated with me (the man rolled his eyes and the woman turned up her chin at me).

It’s difficult going on these kinds of U.S. Southern tours. In a Southwestern river tour in San Antonio, the same kind of glorification of the U.S. went on. Thankfully, at that time, I was with two friends: one a white guy from Florida and the other a Nicaraguan woman from California. My Californian friend and I had each other to complain to, to throw comments at the tour guide, challenging his faithfulness to a U.S. that destroyed a nation, killed its inhabitants, stole its land, and lived to tell the tale by controlling the narrative.

Rivers’s controlled narrative included U.S. Southern slavery as an anecdotal story of U.S. white male survivalism. I summarize: the poor white British came here and were attacked by these unsavory insects called mosquitoes and contracted this horrible hot weather disease called malaria and let me tell you, if we can beat malaria we can beat anything! Even a writer for the NY Times, Christian L. Wright, upheld this narrative of the U.S. South as utterly charming.

The world is in love with Charleston: the antebellum mansions, the cobblestone streets, the mild climate that might bring 70-degree days in February, the scent of tea olive trees that floats in the air, the orchestra of church bells that crescendoes on Sunday morning, the day drinking. It’s a genteel and mannerly place with its complex history in plain view: stone hitching posts from the Revolutionary period, the Old Slave Mart on Chalmers Street that’s now a museum. The belle of South Carolina has also become a cultural hotbed and gastro-magnet — with more restaurants than there are pelicans in the harbor. The tourists — more than five million in 2015 — tend to swarm the recently renovated City Market and pile into horse-drawn carriages, which leaves plenty of room to explore the city’s lesser-known charms.

Rivers mentioned slavery once, by correcting any assumptions that we may have that the City Market, which he said, has been incorrectly called the Slave Market, leading people to believe that slaves were sold in the market, was actually a safe place purchased by Pinckney to establish a farmer’s market for slaves. He quickly gave this history in order to get to his real point about City Market: that the Daughters of the Confederacy had a museum in the market and had really wonderful relics in there and that we really should go and visit the museum. He did slow down, however, to remind us that black people are filthy. I paraphrase: the people sold fish and threw their fish guts into the streets which caused the whole place to really stink! But the city does provide animals that do a great job in cleaning up street filth. They’re called rats. But these rats didn’t clean up the streets. They got fat and ended up near the river, where they became known as river dogs. But, what the rats didn’t tend to, the vultures got.

At the start of the tour, Rivers pointed out three young black boys who were making sweetgrass roses. Rivers said, and here I quote directly, “You’ll see boys selling these roses around. They’ll tell you they’re for basketball camps. They are NOT. It’s just a scam, guys.” Anyone with a passing knowledge of the Gullah people of South Carolina know that sweetgrass weaving is a special skill that the Gullah people have held onto, while most of their history has been taken from them.

It’s difficult being in the U.S. South. I’m sitting in a coffeeshop in which I’m the only black person here who is not working. Dozens of lounging white people, sipping coffee, shooting the breeze with their friends, booking trips to Rome, overseeing summer private tutoring sessions for their children, reading books, reading the newspaper. It’s late morning. At the restaurants along E. Bay St, the diners were primarily white (and likely tourists), the waitstaff primarily white, the kitchen staff overwhelmingly black. On Meeting St, older black women sat in patches of shade, weaving sweetgrass into baskets that they’ll sell for less than they’re worth, baskets that would fetch a pretty dollar if a white person had them in their shops. In the City Market, where, according to Rivers and the websites, slaves were provided a space to sell food, the booths were overwhelmingly held by white people hawking coffee beans, infinity scarves, tchotchkes and t-shirts. The majority of the black vendors sell sweetgrass baskets, an homage of their ancestral past, their present preserved.

Rivers says there is a city ordinance that protects the exterior of any building that is 75 years old or older. He says this with pride when we’re in the sections of Charleston that he both derides because of its wealth–letting us in on the Charleston code for these sections of town: SNOB (Slightly North of Broad) and SOB (South of Broad)–while also confessing that he, too, wants wealth enough to live in SOB. When we’re in areas of Charleston that are neither SNOB nor SOB, Rivers’s contempt for the 75-year exterior housing ordinance is apparent: “To your left you’ll see the ugliest house in all of Charleston & do you know why it’s allowed to stay this ugly? Because of Charleston’s law that protects houses that are 75-years old or older.” He shakes his head in a melodramatic gesture and waxes non-poetically about the shame of preserving such hideousness amongst such splendors (the house was quite close to the house of Nathaniel Russell, a home that Rivers praised for its ostentatious show of interior wealth).

Like many U.S. Southern cities, whiteness is worth preserving and blackness is to be ignored, avoided, erased, scolded. Indigenous americans are completely out-of-the-picture.

One of the things that I appreciated about traveling in México and traveling in Costa Rica, was the ways in which museums and historical sites refused to be kind to the colonialists. Colonialists destroyed their cultures: their languages, spiritual practices, foods, educations, lands. In the U.S., we all live so close together that we tiptoe around white pillagers, working overtime to protect their feelings, their egos. I’m still in search of the U.S. South that has more Native American wealth, black wealth, Mexican wealth than white wealth. A U.S. South that punishes its white people for yes, their ancestors abuses, atrocities that have provided them, in this current time, the luxury of relaxation, the same luxury their forefathers appreciated, the luxury to lounge. After all, in the City Center of Charleston, there are no young white boys hawking their wares, no elderly white women finding patches of shade to stitch their quilts that they hope to sell.

Rivers interfered with the black sweetgrass weavers ability to sell their wares. For every white person who rides in Rivers’s carriage learns that these weavers are degenerates that the city, for some bizarre reason, tolerates.

On the upside, Frank, the horse, refused to be silenced, neighing and trotting in the streets, instead of quietly, submissively, walking under someone else’s orders.